Klickitat County is located in south central Washington. Since time immemorial it was home to the Klickitat and Wishram tribes, hunter-gatherers who subsisted on elk, salmon, and local roots such as camas and celery. White settlers started pouring into the region in the 1850s. The Klickitat developed a complex relationship with the newcomers, but ultimately, they were forcibly displaced by the territorial governor and the U.S. Army, mostly to the Yakama Reservation, which today comprises the northern edge of Klickitat County. Much of the tribal economic base was destroyed when The Dalles dam was constructed in 1957, raising the water level and destroying Celilo Falls, the major fishing and trading center for indigenous people throughout the region. In 2018, the county was home to an estimated 480 indigenous people, who still celebrate traditions such as the appearance of roots in the spring and the annual return of salmon up the Columbia River. There are longhouses in Rock Creek and Roosevelt.

The economy of the county shifted to farming and timber: sheep and cattle raising, wheat, logging and lumber, then later expanding into orchards, vegetables, aluminum, and now drones and wine. Klickitat County has three distinct economic regions. The western third of the county relies on unmanned aerial vehicle (UAV, a.k.a. drones) production, wood products, and orchards and fruit packing. The eastern third is dominated by vegetable farming, as well as the Roosevelt regional landfill. The central third boasts the county seat, Goldendale, the Maryhill Museum, windsurfing and kite boarding beaches, as well as the now-shuttered aluminum smelter. Vineyards and wineries have been expanding across the county.

Job growth in Klickitat County has been highly dependent on manufacturing and specifically the UAV industry – and it’s important to note that there are other important sectors apart from manufacturing. From 2015 to 2018, manufacturing accounted for 670 out of 920 net new jobs in the county. At the end of 2020, factory payrolls were 440 jobs lower than their peak employment in September 2018. Nonmanufacturing employment was growing until COVID-19 kicked in, leading to layoffs in leisure and hospitality and K-12 education. UAVs will continue to play an important role in Klickitat (and in the Columbia Gorge as a whole) going forward, along with agriculture, wood products, and tourism/recreation. Post-COVID-19, the county will likely continue to diversify at a modest pace. Important challenges for the future include securing funding for modernizing the interstate bridge across the Columbia River, and expanding broadband access.

Over the past 25 years, unemployment in Klickitat County has slowly trended lower, as the county economy has become less dependent on resource-based jobs that tend to have large seasonal and cyclical patterns. The gap between the county and the state unemployment rate, which was typically 4 to 6 percentage points in the 1990s, has also closed, and was within a point in 2021. The rate for that year averaged 6.1 percent, only half a point above the lowest rate since the current methodology was adopted in 1990.

In the 2015 to 2019 period, 73 percent of the county’s residents worked at a job in the county. Another 4 percent worked in other Washington counties, while 23 percent who worked in another state were held by county residents – mostly Hood River, Wasco and Multnomah counties in Oregon.

Major trends and events over the last 30 years include:

By mid-2022, preliminary estimates showed that in June, the county had 6,530 nonfarm jobs. On a seasonally-adjusted basis, employment was a bit higher than the pre-pandemic level in February 2020, but was 180 jobs or -2.3 percent below the previous peak in June 2019. Several industries had substantial increases over that three-year period, including professional and business services (from 470 to 600 jobs), education and health services (from 390 to 470 jobs) and all other services (which includes information services, financial activities, and other services, from 550 to 620 jobs).

Two industries had major cutbacks. Manufacturing fell from 1,720 to 1,350 jobs, mostly due to reductions in the drone industry and its suppliers. During the pandemic, public sector job counts dropped from 1,860 to 1,730, with most of the loss coming in K-12 public education.

According to the 2017 Census of Agriculture, there were 750 farms in the county, with a total of more than half a million acres and $99 million in sales. The fruits, tree nuts and berries category accounted for $64 million in sales – the county has extensive production of cherries and wine grapes. There were almost $10 million in sales of cattle and calves, and $8 million in grains, oilseeds, dry beans and dry peas – mostly in wheat.

The agriculture and forestry industry is a major employer in the county, averaging 1,255 jobs in 2021, 17 percent of all jobs. The industry accounted for 13 percent of county personal income in 2020.

The Local Employment Dynamics (LED) database is a joint project of state employment departments and the Census Bureau. It matches state employment data with federal administrative data. Among the products is industry employment by age and sex. All workers covered by state unemployment insurance data are included. Federal workers and non-covered workers like the self-employed are not. Data is presented by place of work, not place of residence.

Industry employment by race and ethnicity

Klickitat jobs by industry and by race/ethnicity of employee, 2020*

In 2021, 32 percent of the jobs in Klickitat paid below $20 per hour versus 24 percent statewide and 31 percent for the state when King County is excluded. Many of these lower-wage jobs were in agriculture and forestry (38 percent), along with retail trade (14 percent) and local government (12 percent). On the upper end, more than a third of the jobs in the county paid $32.00 per hour or more, slightly less than the 37 percent for non-King counties, and further below the 47 percent at the state level. These higher-wage jobs come primarily from two industries: manufacturing (38 percent) and local government (24 percent). 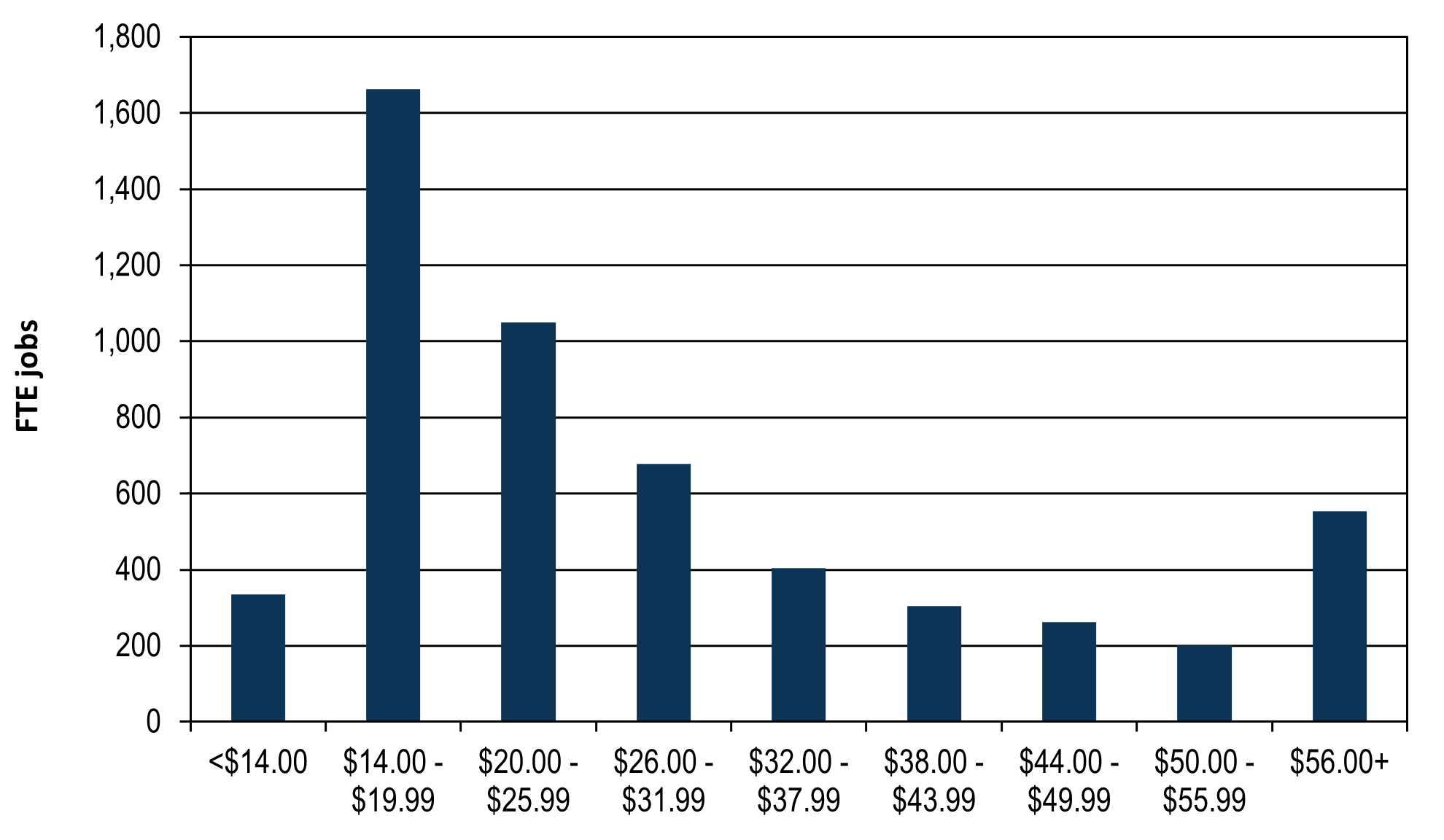 Since 2010, there has been a marked shift to higher-income jobs. Partly, that has been due to the increase in the minimum wage, which has pushed some lower-wage jobs above the $14.00 per hour threshold. There has also been a net gain in the number of jobs in higher wages as well. 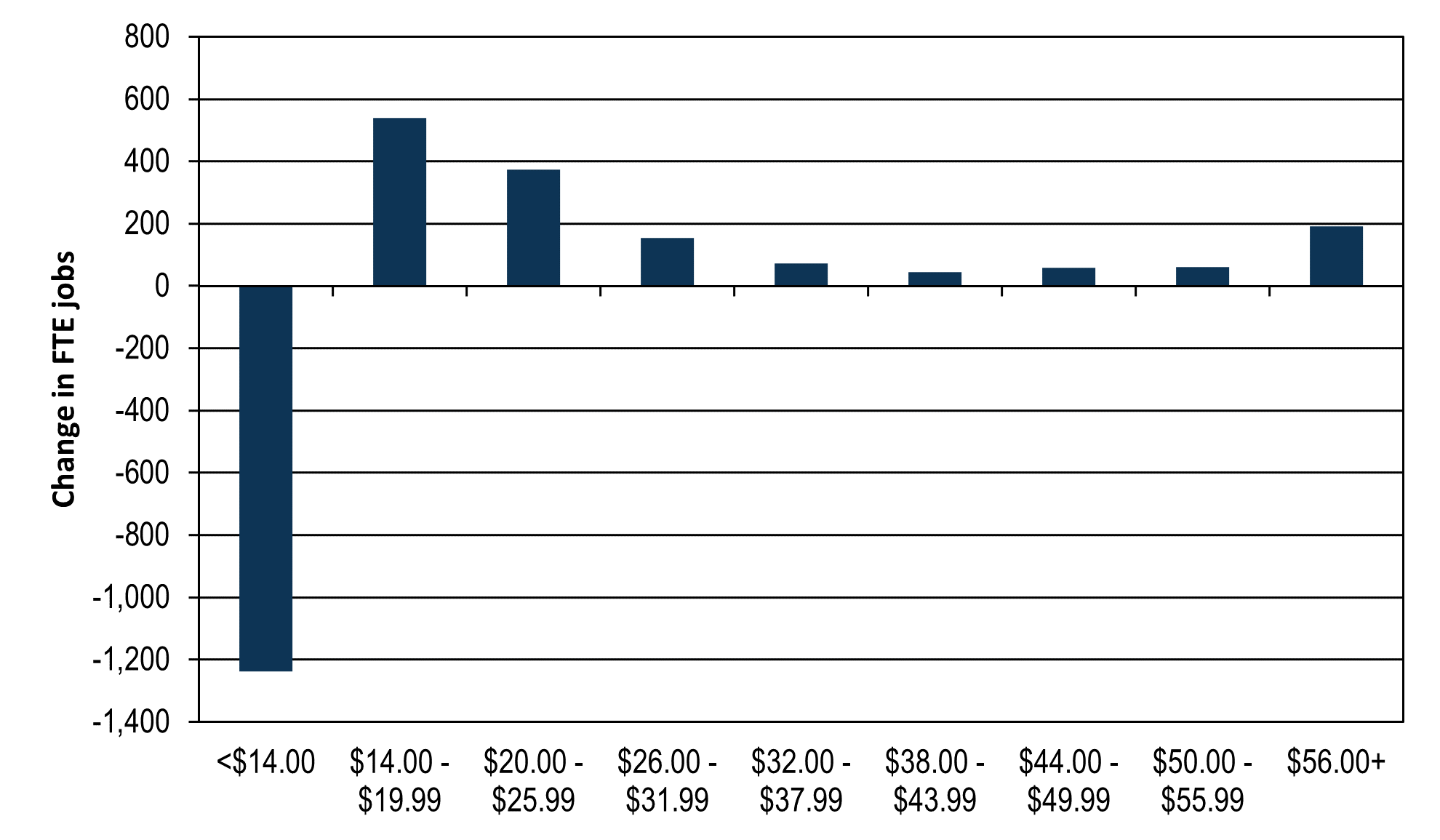 Finally, the following table shows the average monthly wage for jobs in Klickitat County by the race or ethnicity of the job holder. The relatively high wages for jobs held by African Americans stemmed from their concentration in the transportation manufacturing industry.

*Includes all non-federal “full-quarter” jobs covered by unemployment insurance. “Full-quarter” jobs are jobs held by the employee at an employer in the current quarter that existed in the previous quarter and persisted into the next quarter.

Per capita income declined slightly to $51,973 in 2020. Over the past dozen years, Klickitat has moved from 78 percent of the national average to 87 percent, and from 72 percent of the state average to 77 percent. Earned income, investment income, and transfer payments have all grown faster at the county level than for the state and nation.

Transfer payments are an important source of income for county residents, and especially so in 2020 during the pandemic. Transfers jumped from 28 percent of total income to 31 percent in that year, with unemployment insurance benefits and stimulus payments providing most of the increase. On a per capita basis, payments were 24 percent higher in Klickitat than nationally, due to factors like a more elderly population, poverty, and a higher population of veterans.

Recent estimates of household income from the Census Bureau showed that median household income in Klickitat County has increased considerably of late. The median for the five years spanning 2015 to 2019 was $55,773, an increase of 13 percent from the 2010 to 2014 period. That was a smaller increase than the state (14 percent) but larger than the nation (10 percent).

Poverty in Klickitat County was estimated at 15.6 percent for the 2015 through 2019 time span, identical to the previous five years. The county’s rate was more than two points higher than the national average (13.4 percent) and almost five points above the state (10.8 percent).

It seems reasonable to conclude that the lower median income in the county is connected with the higher level of lower-wage jobs. A challenge for the county is to facilitate the development of more middle-income jobs to help lower poverty – no easy task these days.

Klickitat’s population is somewhat older than the state and nation.  In 2021:

The county is also less diverse: in 2021, 78 percent of the population was white and non-Hispanic, compared to 64 percent statewide.

For the 2016 to 2020 period, an average of 26 percent of the Klickitat population aged 25 and older had a bachelor’s degree or higher education, up from 19 percent in the 2011 to 2015 span. The 7 percent increase was twice that of the state and nation, though the level still lagged the 35 percent statewide and 32 percent nationally.