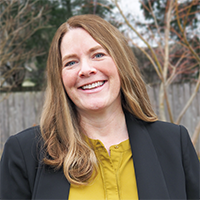 Cami Feek was appointed commissioner for the Employment Security Department (ESD) by Gov. Jay Inslee in June 2021. Prior to that, she served as ESD’s acting commissioner, deputy commissioner and chief operating officer.

Cami originally joined the agency in 2017 to design and stand up the nation’s best Paid Family and Medical Leave program.

She got her start in state government 25 years ago in a non-permanent role in a mail room. She rose to executive leadership through hard work, dedication to public service and living her values of teamwork and servant leadership.

Prior to coming to ESD, Cami worked at the Department of Financial Institutions, General Administration (now Department of Enterprise Services), Washington State Patrol and the Attorney General’s Office under both Republican and Democratic attorneys general.

An avid athlete and coach, Cami understands that achievement comes from cooperation and a shared vision. She translates these principles to her professional leadership, focusing her career on strategic systems design and innovative and effective operations. She knows first-hand that good government is key to bringing about quality services that Washingtonians deserve and expect.

In addition to laying the groundwork for the successful launch of Paid Family and Medical Leave, Cami has also led other major government transformation, such as creating rules for competitive contracting when civil service reform launched. Early in her career, she was instrumental in developing Washington state government’s first automated bid notification system, which is still in use today. Cami fosters diversity, equity and inclusion in the workplace and founded the first LGBTQ+ Employee Resource Group at ESD. This resulted in the agency earning the Outstanding Agency Award from the Rainbow and Inclusion Network, the state’s LGBTQ+ and ally Business Resource Group.

Cami has a Bachelor of Arts in business and public administration from The Evergreen State College, where she also earned a four-year varsity letter in soccer. She lives in Tumwater with her husband and their two children.