Wahkiakum is a small, heavily forested, beautiful county located on the Columbia River roughly 15 miles inland from the Pacific Ocean. Logging is the main industry, and local government is a major source of jobs and wages. The county is an attractive place to retire, and more than a quarter of the county’s personal income comes from transfer payments such as Social Security and Medicare.

Wahkiakum County has an ideal climate for growing Douglas fir trees on a short rotation. It is relatively isolated in terms of transportation infrastructure, linked by Highway 2 to the Longview area (eastward) and Ilwaco (westward). In addition, the county operates a ferry from Cathlamet to Westport, Oregon. As a result, the county has kept a largely rural feel, with much of its land devoted to forests.

Wahkiakum County employment increased by 30 jobs in 2021, from 730 to 760 jobs, and has maintained at that level, aside from a temporary dip in the COVID-19 recession. The most likely scenario over the next few years is for only small changes in total employment.

The county labor force was estimated at 1,363 in 2021, with an unemployment rate of 6.6 percent, down a tenth from the pre-COVID-19 2019 average. Unemployment jumped to 14.5 percent in April 2020, the height of the COVID-19 recession, before steadily falling to normal levels.

According to the Census Bureau, just over half (55 percent) of the county’s employed residents worked outside the county in the 2016 to 2020 period, including 17 percent who worked out of state, mostly in Oregon.

Bureau of Economic Analysis data shows that 59 percent of earned income in the county in 2020 came from residents holding jobs outside the county, while 21 percent of wages at county employers went to workers who lived outside of the county.

Wahkiakum County employment grew steadily during most of the 1990s, and then stabilized around 850 jobs from 1998 to 2008. Job growth came in construction, logging, manufacturing, local government, and non-retail services.

Employment fell to 700 nonfarm jobs in 2012, and before rising slowly to 760 jobs in 2018. Logging employment, at 70 jobs in 2021, was about half of its mid-2000s level. Construction (50 jobs) and manufacturing (70 jobs) were a bit higher than before the recession. Most of the job loss was in the “all other services” category, which dropped from 260 jobs in 2008 to 190 jobs in 2021. Part of the decline was due to the closure of the Columbia Care Center nursing home. Government employed 290, mostly in K-12 schools (80) and other local agencies like the county government (190). In 2020, the recession led to small job losses in the service sector and in local government.

For jobs located in Wahkiakum County in 2020, 52 percent were held by males, and 48 percent by females – while the state was split closer to 51/49. Two industries in the county were dominated by male workers: agriculture/logging (81 percent male) and construction (86 percent). Women were predominant in finance and insurance (82 percent), technical services (71 percent) and health care (71 percent). The average wage for female workers was 78 percent of the average for male workers.

Wahkiakum’s workforce was much older than the state average, with 32 percent aged 55 and older, versus 23 percent statewide.

The charts below contrast industry shares of employment and wages covered by unemployment insurance in the county. The biggest difference: agriculture/forestry (primarily logging) supplied 16 percent of the jobs in the county, and 21 percent of total wages. 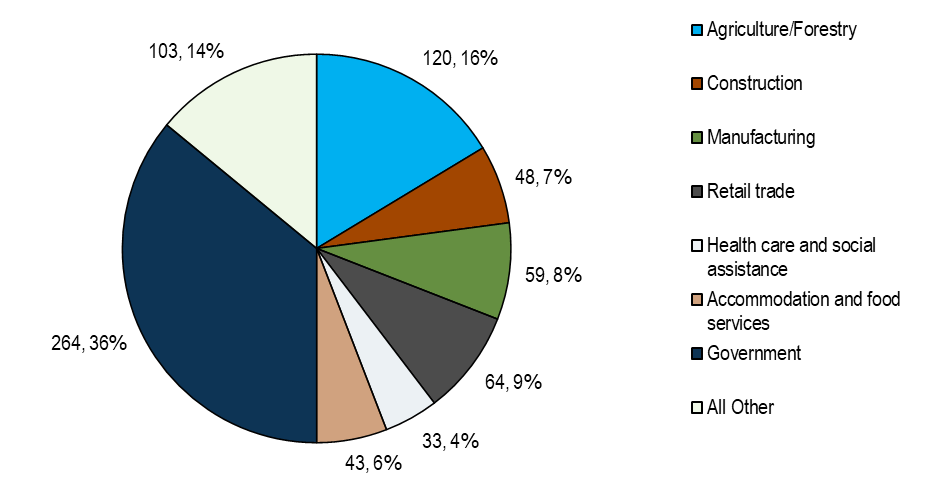 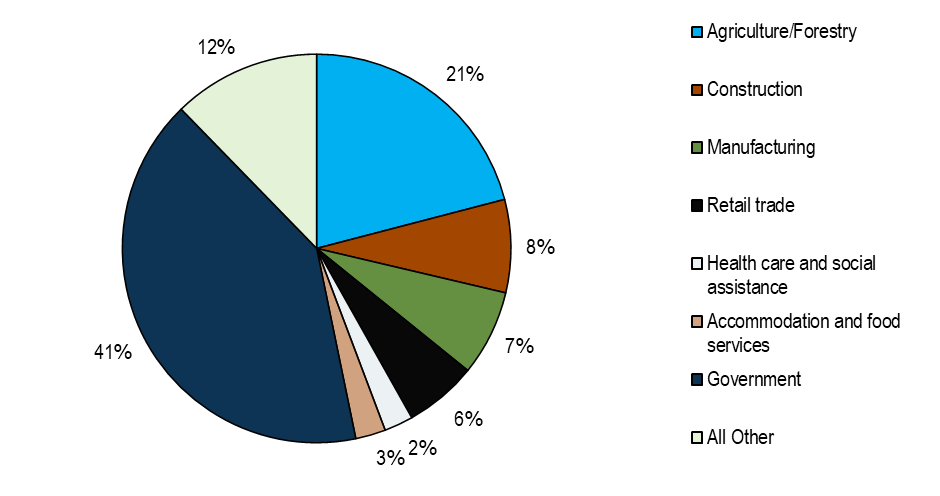 The median hourly wage for non-federal jobs in Wahkiakum County was $24.68 in 2021, an inflation-adjusted 0.8 percent above the 2020 level. Wahkiakum’s median was almost $6 per hour below the median for the entire state, and a bit more than a dollar an hour below the rest of the state if King County is excluded. Wahkiakum topped the state median back in 1997, but wages have grown at a slower pace since then.

Wahkiakum residents are much more dependent upon transfer payments like Social Security and Medicare than most areas: 34 percent of county income came from transfer payments in 2020, almost twice that of the state’s 18 percent. On a per capita basis, the differences were mostly due to Wahkiakum’s older population: higher Social Security and Medicare payments. The county has higher per capita Veterans’ benefits as well.

Wahkiakum’s population was estimated at 4,525 in 2022. That was an increase of 50 residents over 2021 (+1.1 percent). Over the past decade, the county has grown at a faster rate than the national average (1.1 percent per year, vs. 0.6 percent). The official state forecast had the county losing population from 2017 forward, which obviously hasn’t happened. That’s because despite having more deaths than births every year since 1995 – due to its older population – the county has had a steady influx of new residents.

Wahkiakum’s population is much older than the state and nation. In 2021:

The county is also less diverse: in 2021, 86.1 percent of the population was white and non-Latino, compared with 63.7 percent in Washington; and 4.6 percent was Latino, vs. 14.0 percent statewide.

Wahkiakum residents are less likely to have a college degree, and also less likely to have dropped out of high school, than the state and nation. Over the 2016 to 2020 period, only 7.3 percent of adults in the county failed to finish high school (vs. 11.5 percent nationally), and 20.3 percent had a bachelor’s degree or higher (vs. 32.9 percent nationally).