Skamania County is located about 40 miles east of the Portland metro area, in the beautiful Columbia River Gorge. Almost 90 percent of the county is timberland, mostly within the Gifford Pinchot National Forest. Much of the non-timber land is concentrated in the southern strip along the Columbia River, and falls under the protection of the Columbia Gorge Scenic Area. As a result of these factors, the county has a small population and job base, and projections generally call for modest growth in jobs and population over the next 20 years.

Since time immemorial, what is now Skamania County was home to the Chilluckittequw people, who lived along the north bank of the Columbia River. When Europeans came to the area in the late 1700s, the diseases they brought devasted the Chilluckittequw, whose numbers dwindled from around 3,000 to a few hundred. In 1855, like many other indigenous people in the region, they were forced through treaties to give up the rights to their land. A brief rebellion in 1856 failed.

Skamania County was carved out of Clark County in 1854. White settlers had taken over the fishing grounds, and salmon canning became an important export. With the advent of the rail lines through the Columbia Gorge in the early 1900s, the timber industry took off. The construction of Bonneville Dam in the 1930s increased access to cheap power.

Thirty years ago, Skamania County’s economy went through a wrenching transition. Long dependent upon timber for jobs and income, the county lost both when logging was curtailed on national forests, and the Stevenson Co-Ply, the county’s largest employer (owned cooperatively by current and former workers), closed. Ten percent of the county’s job base disappeared, and unemployment topped 22 percent in February 1992. But a year after the closure, the Skamania Lodge, a new destination resort subsidized by federal funds from the Columbia Gorge Scenic Area Act, opened, with almost the same number of jobs. The Gorge became a destination for a new sport – windsurfing. Almost overnight, Skamania had shifted from a timber economy to a tourist economy.

Employment changed little in the subsequent years, with a brief uptick late in the 1990s and a corresponding loss heading into the 2001 recession. Job growth picked up in 2002, but the Great Recession wiped out much of the gains. There has been little change in employment since 2009 – the closure of the Bonneville Hot Springs Resort in 2017 did not help. A residential treatment center that was supposed to open in its stead never materialized.

The COVID-19 pandemic hit Skamania’s tourism-based economy hard. Employment dropped by 19 percent in the first three months of the recession, and there was little recovery in 2020. Hiring picked up in early 2021 and again in early 2022, and as this goes to press, May 2022 employment was within 60 jobs (2.3 percent) of pre-COVID-19 levels.

The transition from timber to tourism over the past few decades was accompanied by a shift in occupational structure, and generally lower wages and income (though official wage data do not include tips). In addition, ex-timber workers who commuted to Clark County for retraining discovered that the commute to the Portland area wasn’t all that onerous. While the number of employed residents grew by about 15 percent during the 1990s, the number of those commuting to jobs outside of the county grew by almost 50 percent. In 2020, 74 percent of the county’s earned income came from jobs outside of the county, easily the highest in the state.

Skamania County will likely see slow but steady employment growth over the next few years, as tourism fully recovers. Manufacturing employment has increased steadily over the past eight years, and that should continue going forward.

A majority of employed county residents work in another county. In the 2016 to 2020 period, 47 percent worked in Skamania, 29 percent worked in another Washington county (mostly Clark and Klickitat), and 24 percent worked outside the state (mostly in the Portland Metro area and in Hood River County in Oregon). About one out of 6 jobs in the county were filled by commuters from other counties.

Then the COVID-19 pandemic hit, impacting employment beginning in April 2020. Employment dropped by 19 percent in the first three months of the recession, with accommodation and food services losing over 400 jobs. A sustained recovery didn’t begin until early in 2021. Preliminary data through May 2022 showed the county still down 60 jobs (-2.3 percent) of pre-COVID-19 levels, with most of the gap in accommodations and food services. 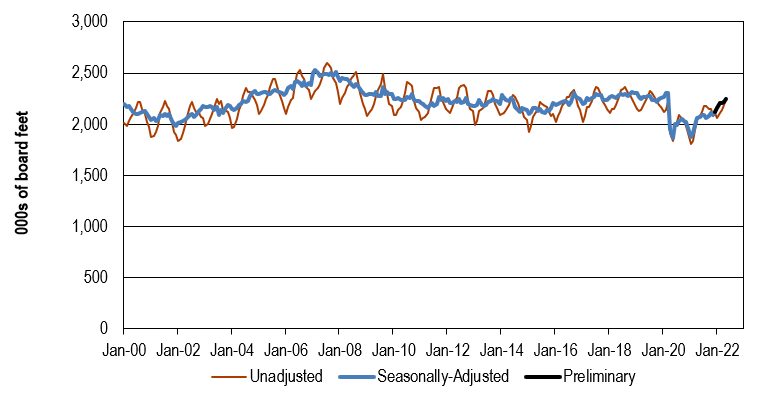 The major trends and events over the last 25 years include:

Skamania County’s agricultural production is a fairly small part of the county economy. According to the 2017 Census of Agriculture, there were 145 farms in the county, covering 5,874 acres. The acreage was down about 10 percent from the 2012 Census. The county still had fewer acres in farmland than any county in the state.

Most of Skamania County is forestland. From 1965 to 1988, timber harvest averaged 386 million board feet a year. Over the last decade, the average plummeted to 75 million board feet, with most of the decline due to lower harvests on federal lands. Recent timber harvests are well below historical levels, and well below the allowable harvest on federal land.1

1 According to the Department of Natural Resources, historical timber harvest data has quality issues, but the overall trend is still valid.

The following table shows estimated employment by industry by the race or ethnicity of the worker holding the job. Some takeaways: Latinx were primarily employed in manufacturing, accommodations and food services, and agriculture. A fourth of Indigenous people worked in accommodations and food services. Asian Americans and African Americans worked in a diverse number of industries. Small numbers meant that data was suppressed in a number of industries and groups.

Skamania County jobs by industry by race/ethnicity of employee, 2020

*Includes all non-federal jobs covered by unemployment insurance, less suppressed industries; insurance; some government jobs (e.g., education) are shown under their NAICS (e.g., NAICS 61). Some data was suppressed, so lines and columns might not add to the total.

The charts below contrast industry shares of employment and wages covered by unemployment insurance in the county. The wage shares of wholesale trade, professional services and government were above their employment shares, while wage shares for retail trade, health care, and accommodations and food services were all below their employment shares. The average wage for all jobs in the county was $46,763. The county’s average wage trended upward very slowly over the past 20 years after factoring out inflation, but over the past three years it has jumped by 22 percent. 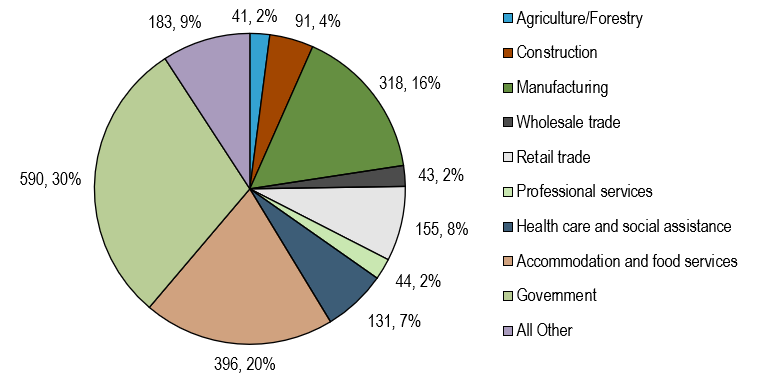 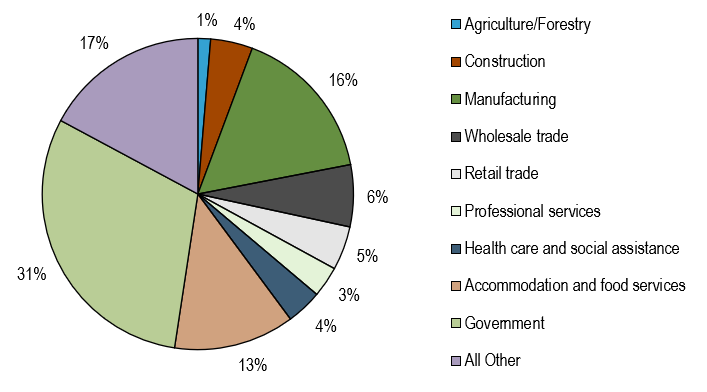 The median hourly wage for non-federal jobs in Skamania County was $23.23 in 2021. The median rose by 9 percent in 2020, in part due to the loss of lower-wage jobs in the recession. The median declined slightly in 2021, as the recovery brought back jobs in accommodations and food services, but was still more than 7 percent above the 2019 median after adjustment for inflation. The county was still more than $2.00 per hour below the state median if King County were excluded.

Finally, the following table shows the average monthly wage for jobs in Skamania County by the race or ethnicity of the job holder. Wages for Indigenous and African American workers were substantially below the average for all workers.

*Includes all non-federal “full-quarter” jobs covered by unemployment insurance. “Full-quarter” jobs are jobs held by the employee at an employer in the current quarter that existed in the previous quarter and persisted into the next quarter.

In 2020, county per capita income was $49,519. That was 26 percent below the state average, and 17 percent below the national average. The gap between the county and the state has closed by 5 percentage points since 2000, while the gap with the nation has closed by 9 percent. Most of the difference was in earned income, which on a per capita basis was about $9,000 lower than the nation and $15,000 below the state. Per capita transfer payments were below the national average, and a bit higher than the state, with higher than average Social Security payments to Skamania’s older-than-average population and lower Medicaid, income maintenance and unemployment insurance compensation.

Skamania’s population was estimated at 11,900 in 2022. The increase of 300 residents since the 2020 Census came primarily through net in-migration. Over the past decade, population has grown by 0.6 percent per year, equaling the national rate.

Skamania’s population is somewhat older than the state and nation. In 2021:

The county is also less diverse: in 2021, 15 percent of the population were people of color, much less than the statewide rate of 36 percent.

Over the past two decades, the percent of county residents with a bachelor’s degree or higher has increased substantially, from 17 percent to 26 percent, while the percent who lacked a high school diploma has dropped to 8 percent, below the national average of 12 percent.