Garfield County is the seventh-smallest county in the state, with only 710.5 square miles. Before white exploration and settlement, the semi-nomadic Nez Perce inhabited the area on both sides of the Nez Perce Trail as means of commerce, which was of strategic importance to the development of the region.

The establishment of the territory and the end of the Indian Wars resulted in an influx of white settlers into the county. Garfield County settlers came and started farming and ranching in the area. Later some settlers started communities in the Pataha Creek area, today’s Pomeroy City, with the first known commercial establishment being a stage station and “eating house” (shaver). By 1875, there was an estimated 200 farms in the area, which produced major crops of pears, wheat, blue grass and others. Garfield County is the least populated county in the state of Washington, ranking 39th among 39 Washington counties, with a population of 2,346 people in 2021, or 3.2 per square mile.

The Garfield County workforce is employed primarily in government services (around 68.5 percent in total). While local government makes up the biggest share of that employment, which includes local education services, federal government employment is very significant for the area by providing stable and higher paying jobs.

Farmland occupies over two-thirds of the county’s total land usage. The main crop is dry land wheat. The total value of agricultural sales tends to be in the same range as the total wages earned for the county.

As of the 2017 Agricultural Census, the county had 226 farms with an average size of 1,283 acres. The number of farms increased by 7.0 percent from the 2012 Census. The market value of agricultural products sold was $37.2 million, with 86.0 percent of that being from crop sales and 14.0 percent from livestock, poultry, and other products. About 36.0 percent of farms in Garfield County have a value of crop sales over $100,000. Main crops in Garfield County include all types of wheat for grain, barley for grain, chickpeas, canola and forage. The largest livestock inventory are cattle and calves. Only 34.0 percent of Garfield farms hire farm labor, and 92.0 percent of all farms are family farms.

Demographics also play a role in Garfield County’s economy, as a high proportion of elderly residents continue to increase demand for local health care services, which in this county are mostly provided by the government sector. Health care and social services are projected to grow at a faster than average rate.

Garfield County’s employment has been in a decline trend since 2011. Since the recession of 2007, covered employment has not recovered and continues its downward trend with a new 10-year low in 2020. This puts a lot of strain on the economic well-being of this small rural county.

Wholesale trade and retail trade will continue to be the cluster that provides the most private sector jobs. Major agricultural commodities will remain in production if there is sufficient demand and proper weather conditions. Government employment is the leading employing industry and the only one that has shown stability; however, it has decreased in employment over the past year.

The Columbia Pulp project in nearby Starbuck, Columbia County contributed to more resident employment stability, as well as availability of work throughout 2020.

In 2021, the county labor force was estimated at 839, with an increase of 2.9 percent over the year. The number of people employed was estimated at 791, while about 48 people were estimated to be unemployed and looking for work. Resident employment continued to increase over the year, while the number of people looking for work found employment and entered the labor force.

Unemployment was down to 5.7 percent in 2021 from 8.5 percent in 2020. Yearly averages in the labor force show some volatility, which is associated with the government and seasonal agricultural economic base. 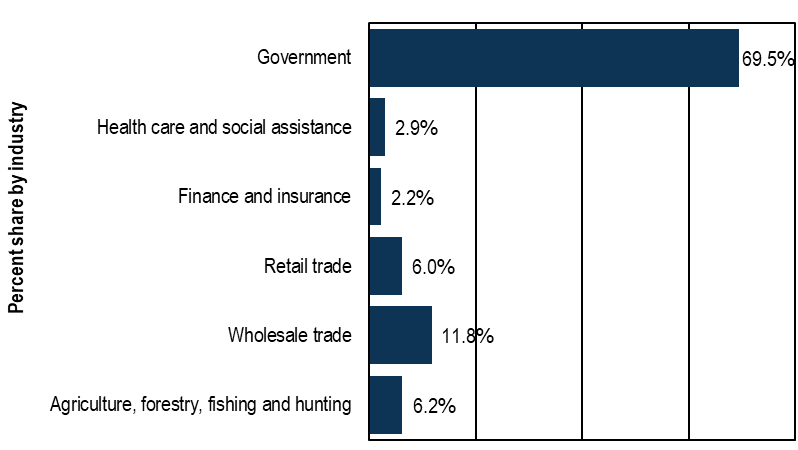 The Local Employment Dynamics (LED) database, a joint project of state employment departments and the U.S. Census Bureau, matches state employment data with federal administrative data. Among the products is industry employment by age and gender. All workers covered by state unemployment insurance data are included; federal workers and non-covered workers, such as the self-employed, are not. Data is presented by place of work, not place of residence. Some highlights:

The Garfield County workforce was mostly male in 2020; 51.7 percent of all industry jobs were held by men and 48.3 percent were held by women. Industry differences are discussed below: 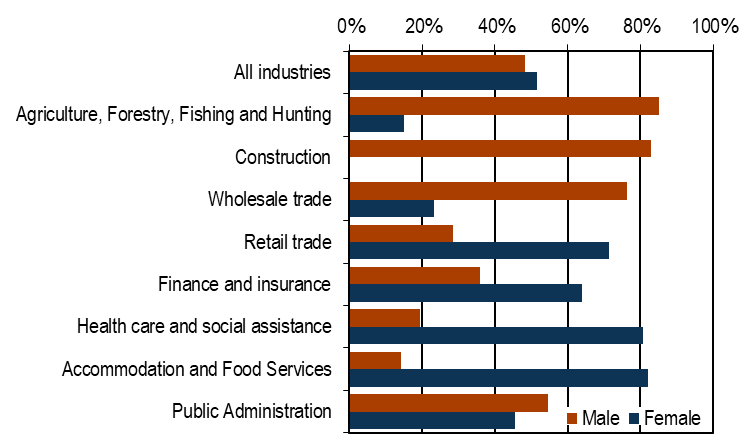 In 2020, Garfield County had 645 jobs covered by unemployment insurance, with a total payroll of over $34.2 million.

In the year of 2020, 11.4 percent of the population was living below the poverty level in Garfield County. This compares to the state at 9.5 percent and the nation at 11.4 percent.

The Garfield County seat and the largest city is Pomeroy with a population of 1,389 in 2020. The second notable city is Pataha City.

Garfield County has a large retirement age community with 25.3 percent of the population being 65 years of age or older.

Females made up 51.2 percent of the county’s population, which is slightly above the state’s 49.9 percent.

Diversity in the county shows that 88.1 percent of residents are white alone not Hispanics or Latino, with 5.6 percent of Hispanic or Latino origin, compared to the state’s 67.5 percent and 13.0 percent, respectively.

Over the same period, it’s estimated that 25.7 percent of people in Garfield County 25 and older have attained a bachelor’s degree or higher. This figure does not compare favorably with the state (36.7 percent).